Another record price for a work of art, this time a painting entitled The Scream by Edvard Munch (pronounced Monk) for $119.9m USD at Sotheby’s New York has caused a predictable stir as to the monetary value of pictures and who should own them.

As in the 1980s when Old Masters were achieving similar astronomical figures the Japanese financial crises was in full swing and works by dead, bankable artists became a commodity i.e. where stocks and share were highly volatile art became a safe, long-term haven for money.

In the same week The Sleeping Girl by US Pop Art icon Roy Lichtenstein made $44.9m USD and before that it was Francis Bacon that made the headlines.

Leaving aside the astronomical figures achieved for these works do they reflect the best works artistically in the world too? Currently RTE has a series asking viewers to select Ireland’s Best Painting, so at least a debate is out there talking about pictures, which can’t be bad.

Thus, the headline prices achieved don’t reflect the general art market and their values and certainly don’t mean artists are wealthy as a result. In fact, the general art market is very depressed when auction house prices of five years ago (often for the same works) are compared to today’s, not to mention the prospects for graduate artists currently trying to eke out a living.

Buying art is not an essential purchase for most, so when the economy is down so are sales. The extraordinary prices achieved during the boom in Ireland were not just as a result of available cheap money but also due to the many new entrants to the market that increased the volume of output produced by artists. Many of the new entrants during this period who bought more for investment purposes than love of the work are now offloading and this is another reason for the current downward pressure on prices.

As to the argument that The Scream and the Sleeping Girl ought to be in a public museum for all to enjoy rather than in the boudoir of some billionaire asks the question of the correlation between high price and artistic merit. True, the majority of museums around the world can never compete with the oligarchs’ money, but aren’t curators better off buying a clutch of other less celebrated works for display that convey equal artistic integrity that appeal to the public?

Besides, works of art are often bought at auction privately and donated to museums, so even if the rich don’t want their house insurance premiums going through the roof with their purchases, showing a little altruism to the greater good is commendable.

The end of May has no less than three interesting art auctions in Dublin. Whyte’s have a batch of Louis le Brocquy’s work;  DeVere’s have a wide selection of early-mid 20th Century Irish artists and Adams have a marble sculpture by John Hogan of Francis Sylvester Mahony (he who wrote the Bells of Shandon) estimated between €4-6000. Why not buy it and donate to the Crawford Art Gallery in Cork?
Posted by Pascal McNamara at 07:15 No comments:

The Golden Age of Cork Silver

During the years spanning 1760 to 1820 almost sixty silversmiths manufactured silver in Cork city. By 1840 none existed until William Egan & Sons revived the trade seventy- one years later, sparked by a commission for a new mace from the president of University College Cork, Sir Bertram Windle. The rise and fall of this phenomenon has parallels with the social and economic history of the city and beyond.

Carden Terry was perhaps the best known and skilled silversmith of this generation gaining experience of his craft in Dublin and London before finally settling in Cork in 1770. He operated from the North Main Street with his son-in-law John Williams.

After the demise of both craftsmen Jane Williams, Carden’s daughter / John’s wife, continued the business in to the 1820’s. Their family hallmark of CT & IW identifies some of the most accomplished production of neo-classical silver in Ireland and included tureens, jugs, sauceboats, teapots and bright-cut table ware.
One of the most reassuring features of the production of solid silver is hallmarking.

When a silversmith finishes creating an item of silver it is sent to the assay office in Dublin to ensure the metal used is 92.5% solid silver and after verification and tax duties paid four punches are impressed on to the product.

The first is the Harp Crowned to denote the Dublin assay office approval, then a seated figure of Hibernia to signify duties paid followed by the silversmith’s initials and finally a letter to denote the year. The introduction of hallmarking in 1637 was the first quality control system introduced for consumer goods to maintain standards and prevent fraud. 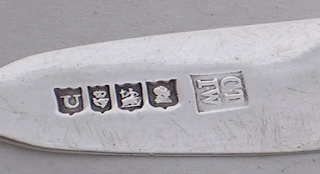 A major influence on the design of Cork silver was the arrival of Huguenot craftsmen in the late seventeenth century. Names such as Robert Goble, Charles Begheagle and Adam Billon laid the early foundations of the great trade and manufacture of silver as they introduced finely chased repoussé decoration.

The popularity of silverware as household items and tableware evolved during the 1700s as Cork merchants prospered and required domestic adornments displayed on dark polished furniture in their newly built mansions and villas as evidence of wealth and social standing.

Indeed the range of domestic silverware broadened widely in response to a growing market to include pickle forks, basting spoons, shoe buckles, christening mugs, cigarette cases, chocolate pots, to name but a few. This is in stark contrast to the meagre output of silverware prior to 1730 that existed only to serve the ecclesiastical market.

As the golden age of trade in Cork during the 1700s depended on the British crown fighting various wars with France and in New England, relative peace was bad news for the provisions trade that supplied war ships and troops with pork, butter and other essentials through Cork harbour.

Events nationally, such as the Act of Union in 1800 meant the political classes were required in London rather than Dublin and mass production of silverware brought about by the industrial revolution in Sheffield, Birmingham and London meant Irish silversmiths couldn’t compete.

Eagan’s of Patrick Street revived the manufacture of silver from 1911 before ceasing production in 1986 and finally closing their premises in 1988. 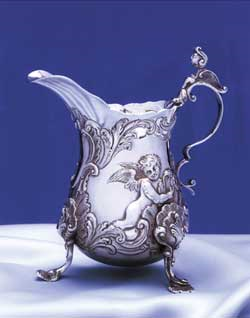 Bidding for Value at Auction

Whether furnishing for the first time or just revamping your living space one would do well to visit your local antique auction rooms to avail of fantastic value in furniture, fine art and effects.

Prices are at an all-time low for solid mahogany (mostly) furniture, handmade in the Georgian, Victorian or Edwardian eras. These classics pieces have endured the test of time and will never go out of fashion. And you don’t need a period type house either.

Chosen correctly, antique furniture can provide a signature piece or statement item to the most contemporary dwelling. And best of all if you move house or remodel at a later stage you can always return it to the auction rooms again for resale, a luxury not offered by the high street retailer.

In fact, prices of antiques started to fall during the Celtic Tiger years before the current recession for three main reasons. During the property boom first time buyers wanted (understandably) new furniture for their new abode, and a huge choice of retailers were there to oblige at reasonable cost.

Also, first time buyers generally are twenty-something’s and thus aren’t interested in the furniture of their parents or grandparents.

Then over a decade or so ago the vogue for French, white / cream style furnishing crept in followed by the arrival in this country of IKEA with its minimalist, Scandinavian sleekness. Dark oak and mahogany furniture was seriously challenged.  And lastly, modern houses have lower ceilings in smaller rooms unsuited to the majestic scale of Victorian side boards and bookcases.

So pieces to look out for in particular are: occasional & side tables, card tables, ladies work tables, sofa tables and library tables. These pieces will fit either an apartment or large house, will add elegance and are practical. Remember, before purchasing seating such as chairs or sofas, these pieces have been sat on over long periods of time and thus the upholstery and frames may be weakened.

Prudence is needed before purchasing at auction. Always view an auction beforehand as this is still second hand goods and defects do exist; bring a measuring tape to make sure the piece fits in to your space at home and stick to a price limit.

The guide prices provided by the auctioneer are a good ballpark estimate but it’s so easy to get carried away in the heat of bidding especially if you’re the competitive type! And don’t forget to factor in auctioneers commission, VAT and delivery (if applicable). Happy hunting!
Posted by Pascal McNamara at 07:16 No comments: